The bridging projects of the Membrane Protein Structural Dynamics Consortium (MPSDC) support the work of the laboratories of the participating investigators. They add to or bridge the intellectual and technological approaches of the collaborative project and add to the overall cohesiveness of the large-scale effort. They are organized as stand-alone research efforts, but are integrated as sub-projects that tie together or enhance the contribution of the independent work and expertise of the participating investigator to the Consortium and expand the independent work in new directions.

This project takes advantage of the available crystallographic snapshots of SERCA, and the recently solved first crystal structure of the Na/K pump as the baselines to explore ATP-driven ion translocation experimentally and computationally. This combined experimental and computational approach will reveal new insights on the conformational dynamics and energetic landscape associated with the pump’s catalytic and transport cycles.

This Project will focus on the eukaryotic ABC transporter P-glycoprotein (Pgp, ABCB1), a human multidrug efflux system. The project aims to integrate computational, biochemical and spectroscopic approaches to understand Pgp transport mechanism, focusing on the relationship between ATP- and substrate-regulated reorientations in the transmembrane domain (TMD) and the cycles of dimerization and dissociation at the nucleotide binding domains (NBDs). 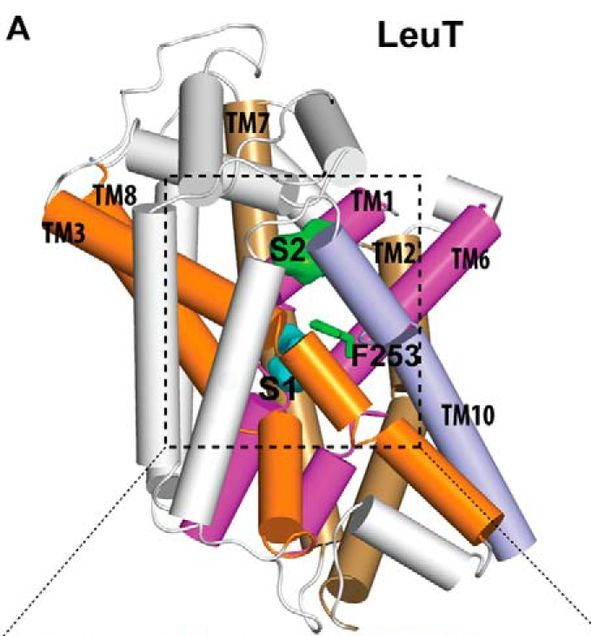 Dynamics of Ion Permeation and Conformational Coupling in – KcsA

Based on the semi-synthetic generation of KcsA, together with specific unnatural amino acid incorporation, this Project will focus, with unprecedented resolution, in the gating mechanisms taking place at the K+ channel selectivity filter. Starting from a number of recently determined structures representing snapshots of activation and inactivation intermediates, we will use a variety of spectroscopic and high-bandwidth electrophysiology techniques to look into the process of ion permeation, activation and inactivation.

The CLC family of chloride channels and transporters is necessary for proper neuronal, cardiovascular, and epithelial function. The X-ray crystallographic structure of the ClC-ec1 homolog provides an invaluable structural foundation for understanding molecular mechanisms in this family. However, this static picture cannot convey the structural dynamics and conformational changes necessary to carry out function. Despite crystallization under a wide variety of conditions, only one basic conformation has ever been detected. Therefore, in order to gain insight into the CLC mechanism, alternative strategies to assess conformational changes and protein dynamics are essential. This project will address the multiple structural conformations that underlie the dual function of ClC- proteins as both channels and coupled transporters. Using a combination of NMR (Solution and Solid-State) and molecular dynamics (MD) simulations, the multiple conformations that support ion transported will be accessed by binding and unbinding of its two ligands, (Cl- and H+). Additional efforts will be made to use conformation-specific ligands to “lock” CLC proteins in order to study these conformations by crystallography and NMR.

How transmembrane (TM) domains of membrane proteins transmit the signal across the cell membrane has long been a subject of interest and challenge in biology. There is a recent paradigm shift in the activation process of the cytokine receptor superfamily. The role of cytokine hormone binding to the extracellular domain is now recognized as an “inducer” of the conformational change of pre-dimerized TM domains that triggers subsequent intracellular responses, which is drastically different from the traditional view as an “organizer” to initiates the receptor TM dimer formation (Fig. 2). Our long-term goal is to delineate the mechanisms and energetics of TM-induced signaling of various single-pass TM receptors during the inactive to active transition upon ligand binding.

To understand better the structural basis of PTS-mediated transport, we solved the first structure of a PTS EIIC transporter, ChbC, which is specific for the transport of the mono-, di- and tri-saccharide of N-acetylglucosamine (GlcNAc). The structure reveals a ten-transmembrane helix fold with no detectable structural homology with other transporters of known structure. The ChbC protomer can be divided into two domains: one forming a dimer interface with another ChbC protomer, and binding domain containing a substrate molecule, most likely the (GlcNAc)2 disaccharide, located in a large, electronegative binding cavity near the cytoplasmic side of transporter. Because there is no pathway from the binding cavity to the cytoplasm large enough to permit the substrate, this conformation likely corresponds to the inward-facing occluded state of the transporter. Based on this crystal structure, we have proposed a tentative mechanism for how the sugar is translocated across the bilayer. Experimental confirmation of this mechanism, however, represents a considerable technical challenge, as devising a strategy to trap a particular conformation in a crystal for diffraction studies is not straightforward. Here we propose a series of experiments to complement our crystallographic studies of ChbC-mediated phosphorylation-coupled transport by using double electron-electron resonance (DEER) electron paramagnetic resonance (EPR) spectroscopy and molecular dynamics simulations to probe the conformational changes and energetics underlying the transport cycle of ChbC.

Glutamate transporters reside at glutamatergic synapses in the plasma membranes of neurons and glial cells and pump the neurotransmitter from the synaptic cleft into the cytoplasm against nearly a million-fold concentration gradient. Crystallographic studies on a bacterial homologue, GltPh, have suggested that this process entails large-scale trans-membrane movements of the peripheral transport domains within the scaffold provided by three centrally located trimerization domains. Substrate and co-transported sodium ions bind to the transport domains in the outward-facing conformation, in which the binding sites are accessible from the extracellular solution. Following binding, the transport domains move over 15 Å across the lipid membranes. Next, the substrate and ions are released into the cytoplasm, and the unloaded transport domains return into the outward-facing conformation.