One of our long-term projects on Structural Dynamics of ABC Transporters integrates computational, biochemical and spectroscopic approaches to understand the structural dynamics of the ATP binding cassette (ABC) transporters, which are associated with a number of human pathologies and play critical roles in the removal of cytotoxic agents.

Among the MPSDC participants in this project is Dr. Emad Tajkhorshid, whose contribution is applying molecular dynamics (MD) simulations integrating experimental constraints to develop structural models for key conformational states and characterize their inter-conversion during the transport cycle.

Tajkhorshid, together with postdoctoral researcher Mahmoud Moradi, recently published a paper on conformational transitions of ATP exporters which was recommended on the F1000Prime or “Faculty of 1000″ website. F1000 is a team of 5,000 Faculty Members – senior scientists and leading experts in all areas of biology and medicine — plus their associates who provide recommendations of important scientific articles, rating them and providing short explanations for their selections.

The publication by Moradi and Tajkhorshid, titled “Mechanistic picture for conformational transition of a membrane transporter at atomic resolution“, was published on November 19, 2013 in PNAS vol. 110, no. 47. The paper describes a nonequilibrium approach which they developed to characterize the conformational transition of MsbA, a member of the ATP-binding cassette exporter family, which is involved in transport of diverse substrates across the membrane. The F1000Prime recommendation, written by Qian Cui, tagged the publication as Good for Teaching, as having an Interesting Hypothesis, and for Technical Advance. Read the F1000 recommendation »

The Beckman Institute at the University of Illinois at Urbana-Champaign produced the following video. In the video, Dr. Tajkhorshid describes how his laboratory has successfully simulated the molecular dance moves that a multidrug resistance membrane transporter undertakes as it pumps compounds out of a cell. This is the first time researchers have been able to simulate the motion of a complex membrane transporter in its native environment in full atomic detail and gives drug developers vital new targets to help combat drug-resistant cancers and other diseases.

The popular NIH Biomedical Beat blog, which covers research news from NIGMS, featured the video on their website. As per the blog page, “In this video, Emad Tajkhorshid of the University of Illinois at Urbana-Champaign explains the molecular dance of ABC transporters, a family of molecular machines that utilize ATP to move substances across the cell membrane. Tajkhorshid and his team recently used computational methods to map the movements between two known structural models of MsbA, a bacterial version of a transporter in human cells that helps to export anti-cancer drugs. They then described the individual steps of the molecular motions during the transport cycle. Understanding the process at such a detailed level could suggest new targets for treating a range of diseases, including some drug-resistant cancers that often make more transporter proteins to kick out medications meant to kill them.”

Additionally, Tajkhorshid and Moradi were also featured in the University of Illinois News Bureau, in an article titled “Difficult dance steps: Team learns how membrane transporter moves.” The article helpfully describes the nature of the research and points to its innovation.

According to the article, “the new findings, reported in the Proceedings of the National Academy of Sciences, will help scientists figure out how other transporters work. The work also offers new insights into multi-drug-resistant (MDR) cancers, some of which use these transporters to export cancer-killing drugs.” Previously, it has been difficult to research large, membrane-bound proteins like MsbA because they are not easy to crystallize, and each crystal structure reflects only one of the many conformations of these shape-shifting proteins. This study marks “the first time that we are characterizing a very complex structural transition at atomic-level resolution for a large protein,” Dr. Tajkhorshid is quoted as saying.

Emad Tajkhorshid is Professor of Biochemistry, Biophysics, and Pharmacology and an affiliate of the Beckman Institute for Advanced Science and Technology at the University of Illinois at Urbana-Champaign.

Interview with Robert Nakamoto, MPSDC collaborator and Chair of the 2014 BPS Program Committee

Interview with Francisco Bezanilla, MPSDC collaborator and President of the Biophysical Society 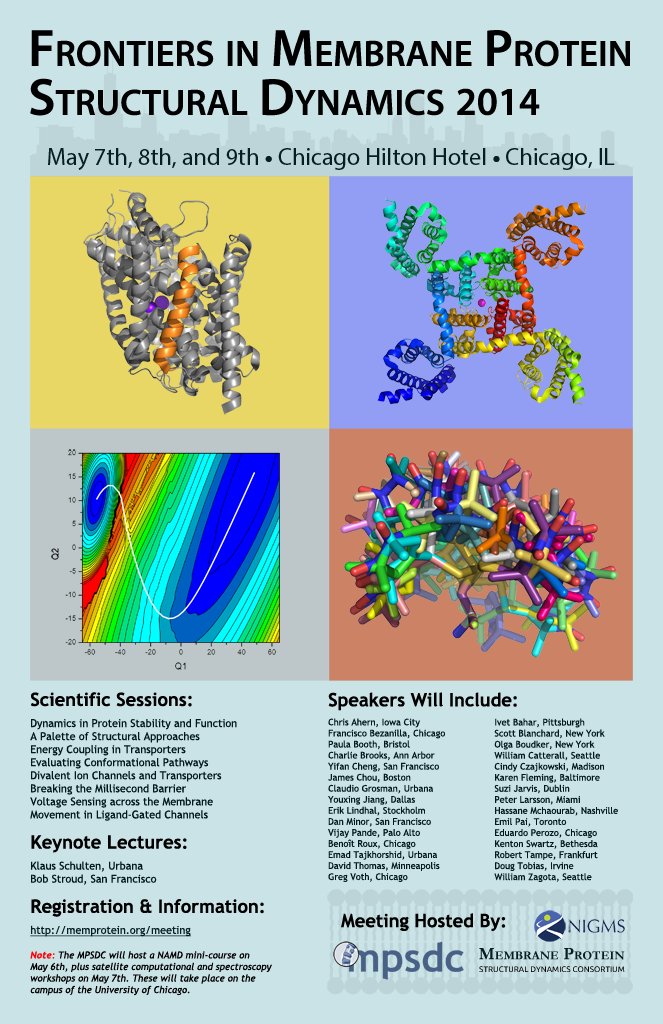 If you wish to print this poster, here are some pdf files that have been optimized for high quality printing:

If you wish to publish this poster on the web or via email, here are some image links for embedding:

Remember, please register early, as all of our previous conferences have been booked over capacity!