Archive by date: May

Thank you for attending Frontiers in Membrane Protein Structural Dynamics 2014

On May 7th, 8th, and 9th, the Membrane Protein Structural Dynamics Consortium (MPSDC) held its second Frontiers in Membrane Protein Structural Dynamics meeting at the Chicago Hilton Hotel. The meeting featured both Consortium members and external invitees, and consisted of eight scientific sessions, poster presentations (and mandatory one-minute Flash! Poster talks), as well as two keynote lectures by Robert Stroud (UCSF) and Klaus Schulten (UIUC). Prior to the conference, the MPSDC hosted several satellite events including a computational modeling workshop, a mini-symposium meeting concerning the latest advances in computational approaches, and a workshop on spectroscopy methodologies.

Satellite events (May 6th and 7th) 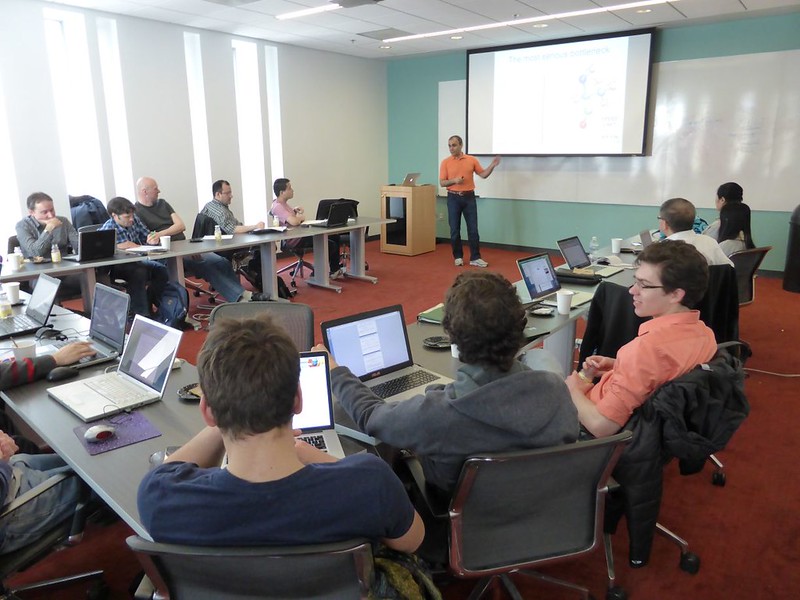 As in previous years, the MPSDC’s Computational Modeling Core hosted a membrane protein modeling workshop, and a computational mini-symposium concerning the latest advances in computational approaches to the study of membrane proteins. The computational modeling workshop was co-chaired by Emad Tajkhorshid (UIUC) and Wonpil Im (University of Kansas) and provided attendants with an overview of the use of the modeling dynamics and visualization software NAMD and VMD, as wel as the CHARMM-GUI Membrane Builter and force field parameterization tools. Jeff Klauda (University of Maryland) was also invited to speak about lipid bilayer simulations. This year’s mini-symposium was chaired by Benoît Roux (University of Chicago) and covered a number of topics including methodologies and their applications, voltage gating, and pumps and transporters.

This year, the Consortium also organized a spectroscopy workshop, co-chaired by Marc Baldus (Utrecht University) and Yeon-Kyun Shin (Iowa State University). This workshop featured both Consortium collaborators and invited speakers, including Ana Correa (University of Chicago), Tae-Young Yoon (Korean Advanced Institute of Science and Technology), Martin Zanni (University of Wisconsin), Gary Lorigan (Miami University), and Daniella Goldfarb (Weizmann Institute). Topics discussed at this workshop focused on addressing techiques in solid-state and solution NMR, EPR including DEER approaches, infrared, fluorescence and single molecule techniques including magnetic tweezers. Both workshops and minisymposium were well attended and productive, and we will continue to host such satellite events in the future. 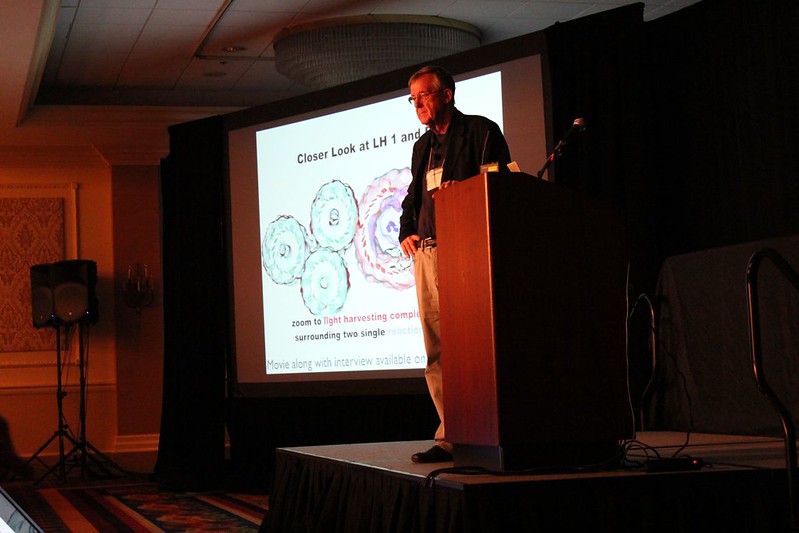 For the first time, we invited two premier scientists in the field of membrane protein biophysics to give a keynote lecture at the meeting.

Our first keynote speaker was Robert Stroud, Professor of Biochemistry & Biophysics and Pharmaceutical Chemistry at the University of California at San Francisco. At the Stroud lab, scientists seek to understand molecular mechanisms of certain key biological processes, as well as signal transduction between processes at the level of protein structure, dynamics, and mechanism. In addition to his posting at UCSF, Dr. Stroud is also the director of the Membrane Protein Expression Center, one of the centers funded by the NIH Common Fund Structural Biology Program. The MPEH develops and applies the latest innovative methods yielding structurally and functionally intact eukaryotic membrane proteins for drug development, and structural and functional characterization.

Stroud’s lecture was titled Wiggle wiggle – not a trickle: How do Membrane transporters work (to concentrate ions 1000 fold)? In his lecture, Stroud discussed how secondary transporters can drive and concentrate nutrients or ions ‘uphill’ (energetically) across membranes achieving gradients of >1000:1 driven by ‘downhill’ movement of other coupled ions, protons, metabolites or electrochemical gradients.

Our second keynote speaker was one of our very own Consortium members: Klaus Schulten, Swanlund Professor of Physics at the University of Illinois at Urbana Champaign. Professor Schulten is a full-time faculty member in the Beckman Institute and directs the Theoretical and Computational Biophysics Group. His professional interests are theoretical physics and theoretical biology. His current research focuses on the structure and function of supramolecular systems in the living cell, and on the development of non-equilibrium statistical mechanical descriptions and efficient computing tools for structural biology. Professor Schulten is a leader in the field of computational biophysics, having devoted over 40 years to establishing the physical mechanisms underlying processes and organization in living systems from the atomic to the organism scale. Schulten is a strong proponent of the use of simulations as a “computational microscope”, to augment experimental research, and to lead to discoveries that could not be made through experiments so far. The molecular dynamics and structure analysis programs NAMD and VMD, born and continuously developed in his group, are used today by many thousands of researchers across the world.

Schulten’s lecture was titled The photosynthetic membrane of purple bacteria – An amazing clockwork of proteins and processes. Schulten described a spherical bioenergetic membrane in purple bacteria of 70nm diameter involving 130 protein complexes called the chromatophore. Hundreds of chromatophores provide a bacterium with energy in the form of ATP, the synthesis of ATP being driven by sun light. The overall function in each chromatophore comes about through a clockwork of intertwined physical processes. Schulten presented a computational description of the subprocesses (using the programs NAMD and PHI as well as quantum chemical programs) along with advanced molecular graphics (using the program VMD), in so doing offering an extremely detailed views of the processes mentioned.

Schulten showed a VMD-produced video during his lecture, which can be viewed here along with the audio from his keynote lecture. Additionally, we interviewed Schulten about his keynote and a number of other topics prior to the meeting; this interview can be accessed here. 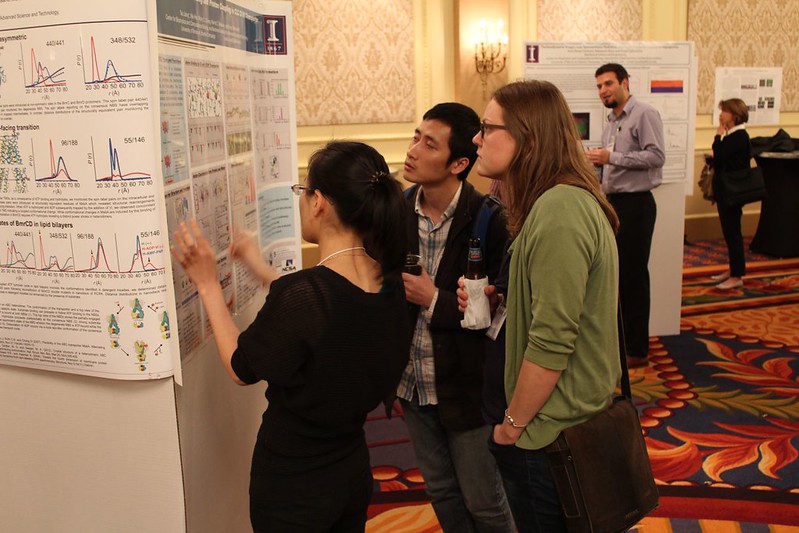 Post-docs and graduate students attending the meeting were invited to bring posters to the meeting, which were displayed in a dedicated room at the Chicago Hilton Hotel. A total number of fifty-two posters were brought to the meeting, representing twenty different institutions and covering an extensive range of topics relating to cutting edge scientific research on membrane proteins. Each of the 52 presenters were asked to give a one minute Flash! Poster talk based on one powerpoint slide that they were asked to bring. These poster talks took place consecutively on Wednesday night, following Robert Stroud’s keynote lecture. 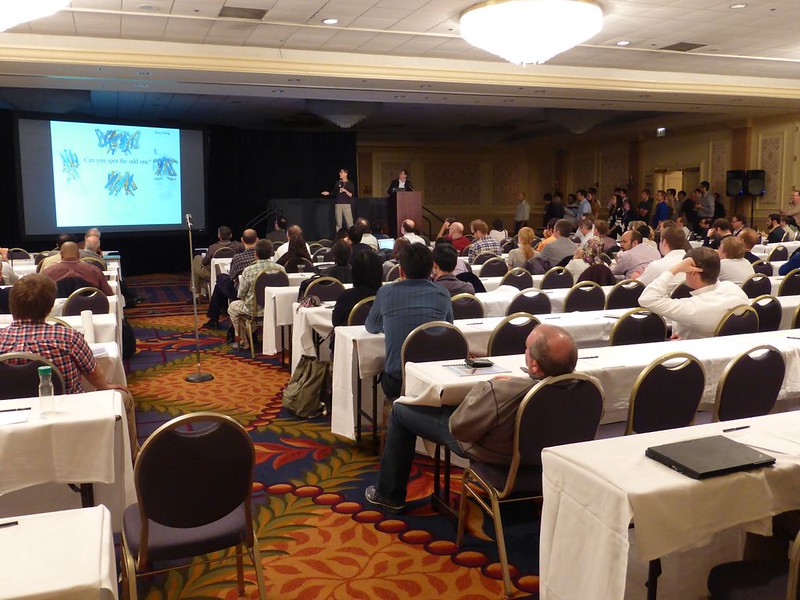 Many attendees agreed that this was one of the most intellectually engaging parts of the meeting. According to Harel Weinstein (Cornell), “one of the most impressive parts of the meeting were the Flash! presentations of the posters, because it underscored (1) the extraordinary interest of young people, and very talented people in this field, and (2) the enormous breadth of this field, both from the biological point of view, and to a large extent, from a computational point of view.” For Weinstein, the MPSDC’s primary goal was and continues to be to create a bridge between experimental and computational research on membrane proteins, and these poster presentations seemed to directly take on that challenge by featuring an intense, visible cross-pollination between experimentation and computation. The fact that this is “coming together under the umbrella, or at least the sponsorship of the Consortium is a great victory for the Consortium idea,” according to Weinstein. Hassane Mchaourab (Vanderbilt) mentioned being very impressed by the posters both in terms of quantity and quality, and with the Flash! talks “which forced students and post-docs to articulate, in one minute, why their work is important, how does it contribute to the field, and to highlight its significance. And that really advertised the work that was presented in more detail in the posters, so I think that was a really good idea.” 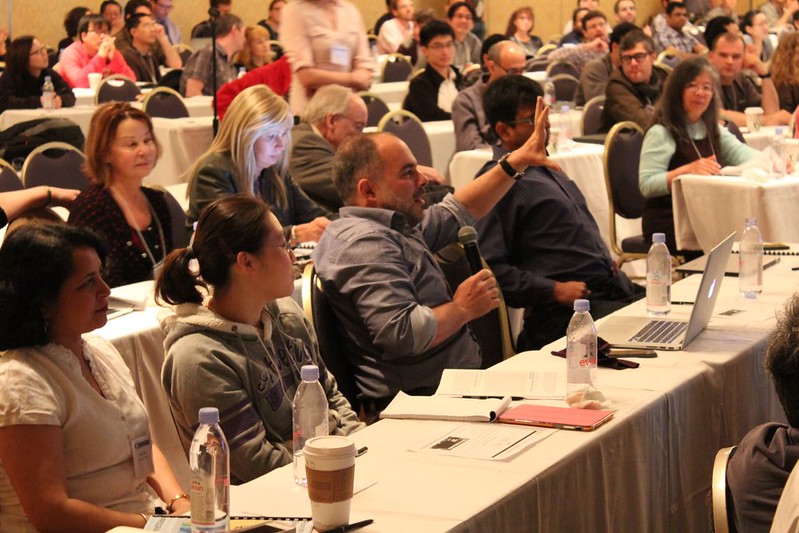 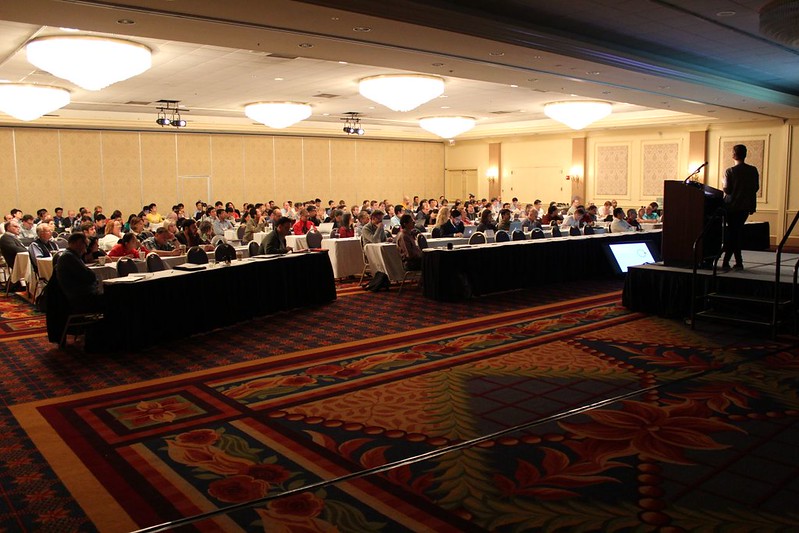 As in previous years, we invited both Consortium PI’s and external invitees to foster productive conversations with our colleagues, as well as possible future collaborations. Accordingly, the official meeting program consisted of twenty-five scientists not affiliated with the MPSDC, along with fifteen Consortium team members. To see each of the individual talks, the official program can be viewed here. All panels were well attended and each of the talks were followed by stimulating discussions between speakers and the audience.

Meeting participants and attendees agreed that this was a productive and valuable meeting. According to Eric Lindhal (Stockholm University), Frontiers in Membrane Protein Structural Dynamics 2014 makes for a “great environment, not just for [research on] simulations or experiments, but really collecting everything that is happening with membrane proteins in the world. I would argue that 75% of the world’s leading groups are in this very room during the meeting.” For Lindhal, the meeting demonstrated that “we’re getting better and better at interfacing simulations very closely with experiment, that experimentalists are getting more involved in running simulations.” Yifan Cheng (UCSF) noted that this was an intense but productive meeting, with many “exciting stories.” Cheng’s group has only recently begun to work on membrane proteins and ion channels, so for him, “this was a great opportunity to be part of the membrane protein structural biology and biophysics community, to get to know people and talk about potential collaborations, and to listen to a lot of wonderful talks from many other labs.” 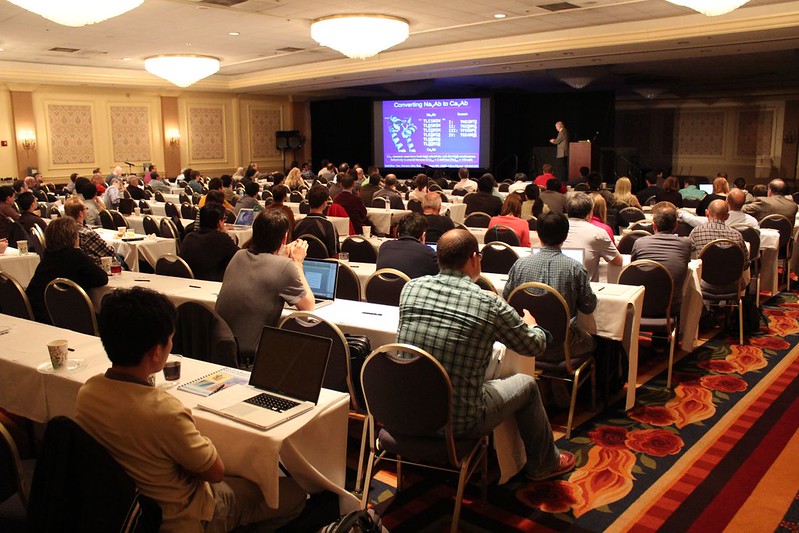 MPSDC collaborators also spoke highly of the meeting. Hassane Mchaourab described Frontiers in Membrane Protein Structural Dynamics 2014 as an “intense meeting, which brought together some of the major players in the field of membrane protein structure, function and dynamics, and allowed them to discuss the frontier of the field.”

We’d like to thank all who attended and took part in this year’s discussions, and look forward to seeing you at our future meetings!

Below are several photos of the meeting and satellite events. You can either scroll through the photos here or visit the photo set on Flickr. We’ve also made available several brief audio interviews with several conference participants, to be found in the margins of the body of this post. We asked participants about their research, and their views on Frontiers in Membrane Protein Structural Dynamics 2014, what they felt were some of the highlights of the meeting, and if applicable, their recent collaborations with the MPSDC. 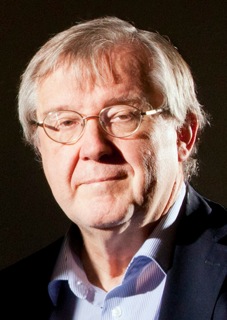 The winners of the Anatrace poster & travel awards are:

Zachary James, University of Minnesota
EPR Detects Changes in the Transmembrane Region of the SERCA-PLB Complex Upon Ser16 Phosphorylation

Adam Chamberlin, University of Calgary
The gating pathway in the voltage-gated proton channel

Congratulations to all recipients!

Biomolecular conformational transitions are essential to biological functions. Most experimental methods report on the long-lived functional states of biomolecules, but information about the transition pathways between these stable states is generally scarce. Such transitions involve short-lived conformational states that are difficult to detect experimentally. For this reason, computational methods are needed to produce plausible hypothetical transition pathways that can then be probed experimentally. Here we propose a simple and computationally efficient method, called ANMPathway, for constructing a physically reasonable pathway between two endpoints of a conformational transition. We adopt a coarse-grained representation of the protein and construct a two-state potential by combining two elastic network models (ENMs) representative of the experimental structures resolved for the endpoints.

ANMPathway determines the most probable (lowest energy) transition pathway between two stable endpoints of a conformational transition. Conceptually, ANMPathway represents a direct application of the string method to a two-state CG system approximated by ANM energy surfaces. The result is a sequence of PDB structure (a “string”) smoothly linking the two endpoints.

This webserver was developed by Avisek Das and Sunhwan Jo from Benoit Roux’s group at the University of Chicago. Please contact us with questions or suggestions using the comments form below.